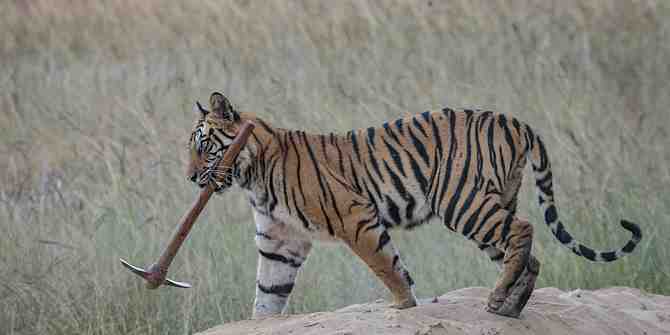 Leaving Delhi on the 20 November, I arrived at Bandhavgarh for a stay of seven days. During this time I enjoyed many wildlife sightings, however, perhaps the most unusual encounter for me was with three sub-adult male tigers of the Rajbahera tigress in the Maghdi range area of the park. One of the siblings walked across the sandy track a short distance into the forest and then reappeared carrying a pickaxe in his jaw which he proceeded to carry past his brothers into the adjoining meadow. A few minuters later he appeared once more and again walked back into forest. Suddenly there was a loud crash followed by the same tiger returning, this time carrying an orange bowl in his mouth! These items had been left behind by the forest department workers. Curiosity and the cat - how very true. It was an amusing scene and I wondered if indeed he would return for a third item of equipment! Not to be, he was joined in the meadow by his two siblings - the 'show' was over!