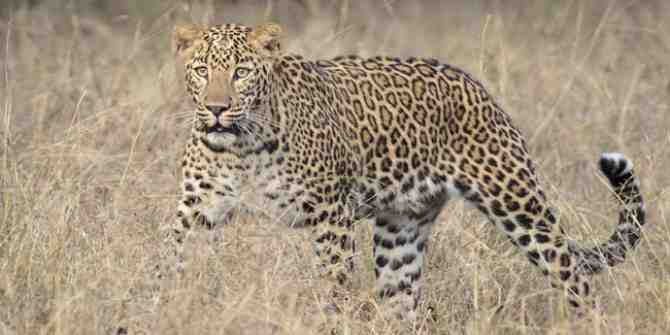 I arrived at my lodge in Tadoba during the evening of the 16 March at the outset of a severe thunderstorm that fortunately cleared in the early morning allowing no disruption of my first drive in the park.  This was to be my first visit to this tiger reserve comprising mainly of teak and bamboo. It is home to about sixty tigers.  During my stay I was able to photograph a young male leopard walking through the tall grass.  Surprisingly a few minutes later three Chital deer  appeared and followed the same path as he. The leopard caught scent of them and made a charge – scattering, the deer escaped into the forest! Thwarted, the young leopard continued his path in the direction of my vehicle allowing me to photograph him approaching through the meadow.  He made his way along the sandy track where he enjoyed rolling.  After quenching his thirst in a pool, he disappeared into the cover of the forest.  Above is a photograph that I took of the leopard about to cross a sandy track.

We were able to photograph a tigress known locally as P2 or ‘Mayae’.  She was making her way along the forest tree line patrolling her home range.

Having spent seven days at Tadoba it was time travel to Gir in Gujarat to photograph the Asiatic lion. Although I successfully photographed lions and other wildlife, I was to some extent disappointed with that part of my trip.  Besides the very poor condition of our jeeps (some without handbrakes and in filthy condition) it seemed that there too many jeeps  chasing the same lion and then the trackers would attempt to move the lion or lions towards the track in order that tourists could take their photos. In my opinion this behavior does not enhance tourism in wildlife parks and regretfully I have no intention of returning to the ‘circus’!