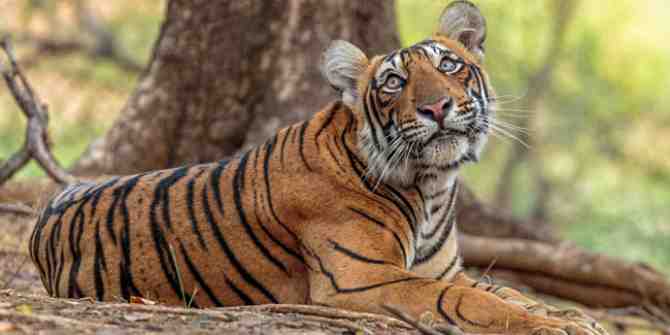 Increases in both the human and tiger population causing problems

Authorities in Maharashtra fear there could be a sharp increase in instances of man-animal conflicts or wildlife officials being called in to capture tigers responsible for killing humans if steps aren’t taken to control the tiger population across central India.  Nitin Kakodkar, the principal chief conservator of forests (wildlife) of the state, said more incidents of tigers being captured or man-animal conflicts should be expected without population control measures in place across central Indian, especially Chandrapur district, home to more than 170 of Maharashtra’s 312 tigers.  There are more than 200 tigers inside and outside protected areas in eastern Vidarbha, which has a forest cover of 22,508 sq km, or 37% of the total geographical area. The human population in this region is 14.5 million.  Wildlife Conservation Trust president Anish Andheria said, “The mistake we make is to compile human-wildlife interaction cases, which are wrongly termed as conflict cases, over a 10-year period, which creates a false impression that large carnivores are bloodthirsty beasts. “By leaving out important information regarding man-made factors, such as forest degradation, fragmentation, forest fires and prey poaching, from the narrative, people get misled into believing tigers have become increasingly aggressive. In fact, the reasons for increased interactions are all man-made. “Owing to this incomplete information, wrong solutions are suggested and implemented. Instead of improving the quality of habitat, strengthening corridors, reducing livestock densities and suggesting behaviour changes in people, what is done on ground is removal of tigers.” See link below to read more.