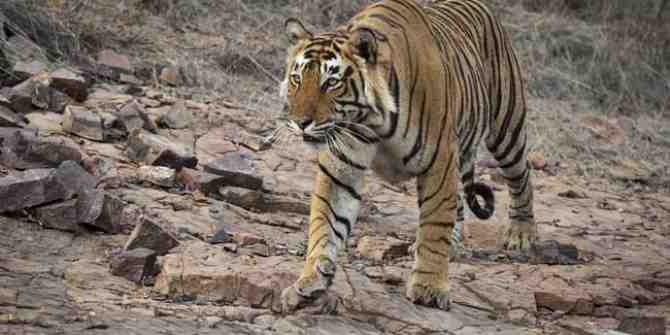 The emotional thrill of seeing your first wild tiger.

Encountering a tiger in the wild is a privilege not to be taken lightly, and an experience never forgotten. Words cannot do justice to this most magnificent of all creatures, but many have tried to capture the instincts triggered by its terrible beauty, the reality of our inherent human frailty when confronted with nature’s most evolved predator.Our consciousness is fully awakened by ‘Tiger tiger, burning bright’. Hairs rise, breath stills, time stops and the heart skips a beat as the sun striped shadows dissolve into the largest of the world’s cats, the sheer wonder of several hundred kilos of elegant muscle and striped intensity.  Originally protected as a sanctuary for Nepal’s Greater One-horned Rhinoceros (Rhinoceros unicornus), the fame of Chitwan was soon usurped by the tiger’s elusive glamour, the undisputed star of the show. Even the Latin name resonates with awe and mystery: Pantheratigris.  Chitwan’s rich habitat, watered by the Raptiand Narayani rivers with alluvial grasslands, mixed riverine forest and the sal-covered Chure Hills, had long been set aside by ruling Ranas as prime hunting country, reserved as a refuge to impress a favoured few royals, viceroys and maharajahs. The Shah kings were required to prove their bravery with bagged tigers and perform obscure religious rites that included climbing inside the carcass of a slaughtered rhino.  Throughout its range, Asia’s apex predator had become critically endangered due to a combination of loss of habitat, depletion of prey species, human conflict, poaching and hunting. South Asian tigers drastically dwindled to less than 2,000 from an estimated population of 40,000 at the turn of the century, plummeting to less than 3,500 from 100,000 worldwide.    Nepal can be proud of its well-protected parks and successful conservation record, the envy of other tiger range countries and with recovery of Nepal’s tigers well ahead of target. Nepali scientists have trained neighbours in scientific counting methods, we contributed sustainable tourism recommendations agreed by all tiger range countries (in Thimphu 2011), and naturalist guides have created conservation awareness with park visitors and celebrities.  No one should live in a world without wild tigers but Nepal’s tigers remain a powerful tourism icon and a potent symbol of Nepal’s conservation success.  More on this interesting article in the Nepali Times by following the link below: